Robin and Udaykumar: Evaluation of antidepressant effects of zoledronate in rats

Evaluation of antidepressant effects of zoledronate in rats

Introduction: Depression is often associated with low bone mineral density. It has been reported that antidepressants, particularly in elderly people, are a cause of low bone strength and fractures. Also it has been found that the antidepressants targeting the serotonin system are harmful for bone health and induce osteoporosis. A relationship between depression and osteoporosis has become more evident over the years, as reduced bone mineral density has been noticed in both depressed women and men. Aged men are more susceptible to the effects of depression on BMD than older women.

It has also been observed from different studies that depressed men have lower bone mineral density than non-depressed men. Studies on animals have also indicated that depression may predispose to osteoporosis.

Recent long-term studies have also shown that women with menopausal status are at higher risk of depression and osteoporosis. The positive effects of bisphosphonates, including improvement in anxiety or depression, is an area of research in the recent years. The application of bisphosphonates, especially risedronate, ibandronate and etidronate in the treatment of depression along with osteoporosis is limited and no studies have been done using zoledronate.

Objective: To evaluate the anti-depressant effect of zoledronate in albino rats.

Materials and Methods: After obtaining approval from Institutional Animal Ethics Committee, 18 albino rats weighing 150-250 grams were taken and divided into 3 groups of 6 rats each.

Results: Zoledronate (0.45 mg/kg) has shown significant reduction in duration of immobility in both forced swim test (p < 0.05) and tail suspension test (p < 0.05) when compared to control.

Conclusion: Results suggest that zoledronate at dose of 0.45 mg/kg has significant anti-depressant effect.

It is also projected that depression will be the second leading cause of DALYs by 2020 if current patterns persist, accounting for 5.7 percent of the overall disease burden. In India, several studies have estimated the prevalence of depression, ranging from 1.7 to 74 per 1000 population.1, 2 Depression is often characterized by disturbances in sleep and appetite as well as deficits in cognition and energy.3

Osteoporosis is a chronic condition that affects both pre- and post-menopausal women and men, and is associated with reduced bone strength. Low bone mineral density is also correlated with depression.4 It has been documented that antidepressants are a cause of low bone strength and fractures, especially in elderly people. In addition, the antidepressants that target the serotonin system have been shown to be harmful for bone health and induce osteoporosis.5, 6

Over the years, a correlation between depression and osteoporosis has become more obvious, as reduced BMD has been found in women and men who are depressed.5, 7 Suspected mechanisms include impaired hypothalamic-pituitary-adrenal system with elevated serum cortisol levels and upregulation of interleukin 6 (IL-6) and tumour necrosis factor (TNF) proinflammatory cytokines.8, 9 Aged men tend to be more vulnerable to the impact of depression on BMD compared to older women. It has also been observed from various studies that depressed men have lower bone mineral density than non-depressed men.5, 7

The pharmacological options available to treat osteoporotic patients with depression were tricyclic antidepressants (TCAs) and selective serotonin reuptake inhibitors (SSRIs). Around one third of these patients do not primarily respond to therapy with antidepressants. Those that do respond will eventually become resistant or show relapse to treatment. Furthermore a series of studies over the last 10-15 years have shown that bone loss can be a possible side effect of SSRIs and may also result due to physiological causes of depression itself.1, 10

A research performed by Kastelan et al. showed that treatment with ibandronate leads to a substantial improvement in mobility and depression.11 Alendronate substantially reduced immobility length and improved motor activity and can therefore be believed to play a role in reducing symptoms of depression.12

18 albino rats procured from animal house of Father Muller Medical College weighing approximately 150 to 200 g healthy and with normal behaviour and activity were included in the study. They were kept under environmental temperature and also in a 12-h light-dark cycle in plastic boxes with metal mesh lids. Animals were provided feed (standard chow pellet) and water ad libitum. The animals were acclimatized for a period of 7 days before the study. The animals were used according to the CPCSEA guidelines for the use and care of experimental animals.

Zoledronate and the standard antidepressant drug fluoxetine were obtained from our institutional pharmacy.

The drugs were administered daily for 1 week

Rats are more selective for this experiment as they give less false positive results. Rats were subjected to a 2 session test. The first session or pre-test was conducted for 15 minutes prior to the drug administration with no behavioural recording. After 24 hours the test session was performed for 5 minutes. Drug naive rats were forced to swim individually in a vertical plexiglass cylinder (capacity:5L, height :50cm , diameter :18cm, containing 15 cm of water maintained at 25°C temperature ). A rat is considered immobile when it floats motionless or makes only those movements necessary to keep its head above the water surface. Duration of immobility is recorded during the 5 minutes test. Antidepressants decrease the immobility time. After 5 minutes, rats were taken out, dried by a towel and warmed under a 100 W lamp. The water was changed after each test because urine and other chemicals released by the first rat could affect the swimming pattern of the next rat. The drug was given for 6 days and on the 7th day, the test was performed 30 minutes after administration of the drug and the results were tabulated and analysed.

TST is behaviour despair model of depression that is employed in rodents like rats and mice to predict the antidepressant potential by decreasing the immobility period produced by different classes of antidepressant drugs. In this test, the rats were both acoustically and visually isolated. They were suspended 58 cm above the floor by an adhesive tape placed approximately 1 cm from the tip of the tail of the rat. Horizontally 15-20 cm below the bench, a square platform made of plywood was positioned slightly below the forepaws of the rat so that the rat could touch the platform with its forepaws slightly and this reduced the weight sustained by its tail. Rats were considered immobile only after they hang passively and completely motionless. The total duration of immobility induced by tail suspension was recorded for a 5 minute period. The drug was given for 6 days and on the 7th day, the test was performed 30 minutes after administration of the drug and the results were tabulated and analysed.

The recorded data was entered in Microsoft Excel.

Probability ‘p’ value less than 0.05 was considered as statistically significant.

A significant (p<0.0001) decrease in the duration of immobility was seen with the standard drug fluoxetine and test drug zoledronate as compared to the control.

A significant (p<0.0001) decrease in the duration of immobility was seen with the standard drug fluoxetine and test drug zoledronate as compared to the control. 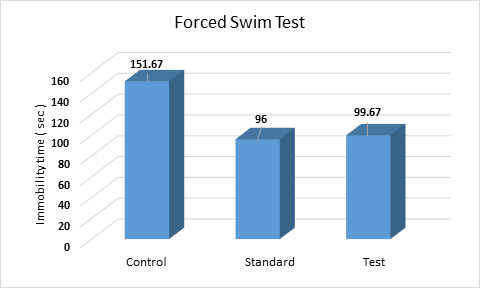 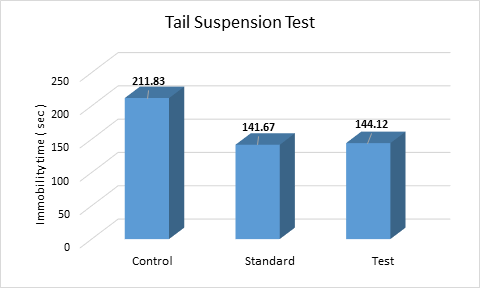 Some conditions, such as osteoporosis, are commonly associated with depression, one of the leading psychiatric illnesses globally. A decrease in BMD has been observed in men and in adolescent girls and women as a result of depression and dysthymia. 5, 19

FST and TST were preferred because they were convenient, gave rapid results and requires minimum apparatus. The results revealed that administration of zoledronate displayed significant decrease in duration of immobility than control, signifying its antidepressant activity. There was no significant decrease in the immobility time when compared between the standard fluoxetine and zoledronate groups in both the tests.

Bisphosphonates inhibit osteoclasts and have anti-apoptotic effect on osteoblasts and therefore prevent bone weakening. Several studies have reported that bisphosphonate activity results in reduction of cytokine levels. BPNs, such as risedronate, have been reported to reduce the cytokine level to a significant extent and are also involved in inhibiting bone resorption. Etidronate, on the other hand has been found to have inhibitory effect on the macrophages for the secretion of cytokines. Bianchi et al. studied and verified the anti-inflammatory activity of ibandronate. Increased levels of cytokines are detected in depression and may lead to low bone mineral density. Studies have already established that anti-inflammatory drugs help in reduction of depression symptoms. The possible mechanism of action of bisphosphonates to reduce depression and increase bone density could be by reduction in the level of cytokines. Thus BPNs can be hypothesised to have antidepressant efficacy by reducing the mediators of inflammation.5, 20, 21

BPNs is also postulated to have central-behavioural effects via regulation of neurosteroid synthesis. Neurosteroids are potent and effective neuromodulators that are produced in the brain from cholesterol. Evidences from various studies indicate that abnormal regulation of the development of neurosteroids plays a role in stress pathophysiology and clinical stress-related disorders, like mood and anxiety disorders.1

BPNs can cross the blood-brain barrier. They are potent inhibitors of cholesterol biosynthesis from mevalonate, mimicking the action of lipophilic statins. Studies have shown that levels of total brain cholesterol correlated positively with the amount of amyloid beta, which is characteristic of pathopysiology for Alzheimer’s disease (AD). Therefore, BPNs can also be a possible option for prevention and/or treatment of AD.1, 22

Some studies have suggested that acid sphingomyelinase-ceramide system is one of the newer potential targets for anti-depression. A study by Roth et al. showed that BPNs reduced the levels of acid sphingomyelinase proving that they can have antidepressant activity.1, 23

Bisphosphonates are among the first choice of drugs for the treatment of bone related disorders such as osteoporosis, Paget’s disease etc. However they have also been found to cause several adverse effects; both long term and short term. Most important long-term adverse effects noted are osteonecrosis of the jaw, atrial fibrillation, renal failure, nephrotic syndrome, femoral fractures and severe suppression of bone turnover. Other most commonly reported short-term adverse effects include oesophagitis, gastric irritation, severe musculoskeletal pain, hypocalcaemia, oesophageal cancer, electrolyte imbalance and ocular inflammation.5, 24

BPNs being antiresorptive drugs are the first choice in the prevention of fractures in patients with osteoporosis The results of the present study have shown that zoledronate has significant antidepressant activity and we believe that zoledronate has the potential to be used as an adjuvant in the treatment of depression. However, results should be further confirmed by animal studies with different experimental models for the evaluation of depression and by conducting human clinical studies. Antidepressant property enhances therapeutic utility. This drug could be used in patients with osteoporosis who have depression, as zoledronate might take care of both osteoporosis and depression. They can be useful in menopausal women in whom both osteoporosis and depression might be present.