Introduction: Depression is a widely prevalent form of mental illnesses worldwide. It is commonly associated with sad mood, loss of interest or pleasure, feelings of guilt or low self-worth, disturbed sleep or appetite, and low energy. Mimosa pudica has many medicinal properties, and are used in traditional medicine in the treatment of various medical conditions. This study was conducted to better understand the antidepressant activity of Mimosa pudica.

Results: The study showed significant reduction in immobility time in both Forced Swim Test and Tail Suspension Test in the EEMP group when compared with the control group.

Conclusion: The study suggests that Ethanolic Extract of Mimosa pudica has anti-depressant activity and can be considered for use in therapy of depression after further testing.

Depression is an extremely prevalent form of mental illnesses worldwide. In 2017, World Health Organisation released a report which estimated that 4.4% of the global population suffered from depression.1 Depressed patients commonly complain about feeling sad, lack of interest in their day to day work, inability to find pleasure in activities that would normally please others, and feelings of discontent. It is also associated with feeling of guilt or reduced self-worth, disturbed sleep, changes in appetite, and low energy.2 In severe forms of depression, patients are known to cause self harm or even suicide.3 Although drugs available for the therapy of depression, they have their limitations, such as delayed therapeutic response and low responders to these drugs, which poses a problem with patient compliance.4, 5 Hence, there is a requirement for alternative treatment of depressive disorders with the use of medicinal plants.

The plant Mimosa pudica is a weed that grows in humid areas, open fields and by roadsides. It grows as a shrub, under 100 cm in height, and is easily identifiable by its characteristic 15 – 20 pairs of leaflets that folds when disturbed, and is hence known as “Lajwanti” in Hindi, and “Touch me not plant” in English.6 It is believed to be native to the Middle Americas and is now found in other in all tropical countries of the Asian subcontinent and South East Asia.7 It has been used as a folk lore medicine since many years because of its various medicinal properties, and because it is an easily cultivable plant and is abundantly available.8

The purpose of this study was to get a better understanding of the antidepressant activity of Mimosa pudica.

Ethical clearance was obtained from the Institutional Animal Ethics Committee before starting the study (Ref No. IAEC/02/02/2019/CPCSEA).

Swiss albino mice, 60 in number, weighing 20-30 g, of either sex, maintained under standard conditions in the Institutional animal house were used. They were housed in clean, transparent polypropylene cages in groups of six and maintained at standard laboratory temperature and humidity (40-60%) with light/dark cycle of 12:12 hours. Animals were fed commercial pelleted chow and water. The mice were allowed to acclimatize to these conditions for a week before starting the experiments.

The Mimosa pudica plants were washed, the leaves were shade dried and powdered. About 200 g of the dried leaf powder of Mimosa pudica was extracted with 99.9% Ethanol in Soxhlet extractor for about 36 hours. The ethanol was then evaporated from the mixture by placing it in a beaker and heating it over a water bath. The extract gave a yield of brownish paste like mass weighing 6g. The yield obtained was 3% w/w with respect to dried powder.11

The mice (n=60) were divided into two arms which was further divided into five groups, each group having six mice. Drugs were given orally after 12 hours of fasting every day, for ten days.

The drugs were prepared and administered per oral (0.1ml/10g).

The method used was as described by Porsolt et al. The mice were induvidually forced to swim in a vertical plexiglass cylinder (capacity: 5L, height: 50cm diameter: 18cm) containing l5cm of water maintained at temperature: 25°C. Mice were subjected to pre-screening, which lasted for 15 minutes. 24 hours after pre-screening, the trial was performed for 6 minutes of which the first two minutes were not recorded, and the periods of immobility for the latter four minutes was measured (in seconds) with a stopwatch. Mice were considered to be immobile when they made only the bare necessary movements to stay afloat, or when they were motionless. The mice were taken out of the plexiglass cylinder after 6 minutes. They were dried with a dry towel, and kept under a dim lamp for drying. The water was discarded after every test, and fresh water was used for the next mouse.14, 15

The method used was as described by Steru et al. Antidepressants that are used in practice are able to reduce the period of immobility of mice when they try to escape when suspended by their tail. This test was a reliable screening method for antidepressants, including those involving serotonergic system. Mice ware hung on a wooden rod, 50 cm above the table, by attaching them from their tail end with the use of an adhesive tape. The first two minutes were not recorded, and the periods of immobility for the latter six minutes was recorded (in seconds) with a stopwatch. Mice were considered to be immobile only when they were motionless and not attempting to escape.14, 16

The recorded data was entered in Microsoft Excel.

The variables recorded followed normal distribution, hence, results have been expressed as mean (in seconds) ± standard error of mean (SEM). The data was analysed using one way ANOVA followed by post-hoc Dunnet’s test.

Probability ‘p’ value less than 0.05 was considered as statistically significant. 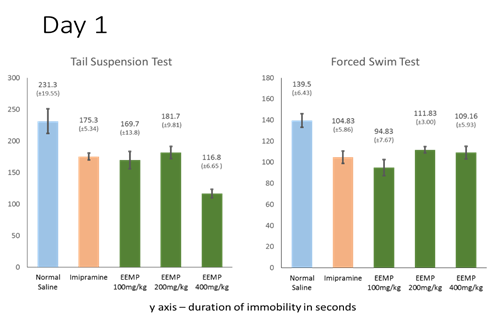 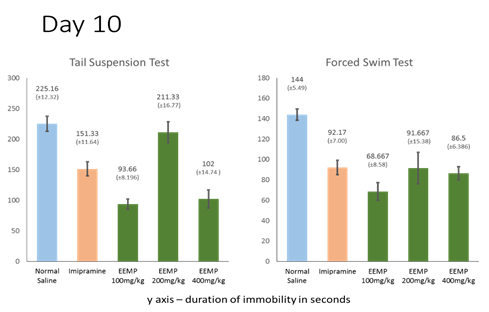 Imipramine inhibits Norepinephrine transporter and Serotonin transporters, increasing their availability at synaptic cleft, thereby reducing depression. The anti-depressant action of EEMP is probably similar to the mechanisms of anti-depressant agents, like Imipramine, that are effective in the above screening models.

Phytochemical investigations done in a study showed the presence of alkaloids, flavonoids and tannins in the extract. It is likely that the antidepressant activity seen with Mimosa pudica could be because of the above mentioned phyto-constituents.18 Further pharmacological investigations are required to understand its underlying mechanism of action in depression.

The results obtained in this study suggests that Ethanolic Extract of Mimosa pudica has anti-depressant activity and can be considered for use in therapy of depression after further testing.