Aim: The main aim of our study is to evaluate sedative and hypnotic activity of aqueous extract of Myristica fragrans houtt seeds in experimental animals.

Materials and Methods: This is a preclinical study involving male and female Wistar albino rats and Swiss albino mice. Sedative and hypnotic properties were assessed using hole board test, open field apparatus, rota rod apparatus and thiopental induced sleeping time. Myristica fragrans aqueous extract( MFAE) was the test drug which was given at the dose of 200mg/kg body weight. Diazepam was used as the standard drug. Preliminary phytochemical analysis of MFAE was carried out.

Sleep is an essential component for sound body and mind. Sleep is characterised by altered consciousness, decreased interaction with surroundings as well as decreased voluntary activities. An adult individual requires average 7-8 hours of sleep every day. Insomnia is a major sleep disorder where the individuals will find difficulty in falling asleep and stay asleep. Insomnia can be long term, short term or transient. Chronic insomnia can lead to depression and can decrease the quality of life.1

Hypnotic drug induces and maintains sleep which is comparable to normal arousable sleep. Sedative drug decreases the excitement and calms the person without inducing sleep, though can cause drowsiness. Currently available sedative hypnotics in the market are benzodiazepines, barbiturates and newer non benzodiazepine group of drugs. They have numerous side effects like tolerance, dependence, hypersensitivity etc.2 Newer herbal drug having sedative hypnotic property might be favourable to mankind. This study which is on evaluation of sedative hypnotic property of aqueous extract of Myristica fragrans seeds might be useful in finding a new drug to treat insomnia, nervousness and to sedate patient before surgical procedure.

Myristica fragrans Houtt commonly known as nutmeg, is a spice which is generally used in Indian cuisine as a sweetener, aromatic and savouring agent. Nutmeg is the dried seed kernel of Myristica fragrans Houtt (Family Myristicaceae). Besides its common use as a kitchen spice, in alternative medicine nutmeg has been used as a stimulant, anti-diarrheal, carminative, stomachic, tonic, and as aphrodisiac.3, 4 Studies have demonstrated following pharmacological actions like analgesic,5 antifungal,6 antimicrobial,7 anti-inflammatory8 as well as hepatoprotective9 activities. Folklore use mentions nutmeg paste mixed with honey is given to infants who cry at night for no evident reason, to induce sleep

The objective of the study is screening for sedative and sleep enhancing activity of aqueous extract of Myristica fragrans houtt seeds in experimental animals (rats & mice).

This study was conducted in the Ethno pharmacology laboratory, Department of Pharmacology, Yenepoya Medical College, Mangaluru, after obtaining the approval from the Institutional Animal Ethics Committee (IAEC).

The dried seed powder weighed around –250 g. It was wrapped in a muslin cloth and extracted using 1000ml of distilled water in Soxhlet apparatus 10, 11 maintained at around 70oC - 80oC for period of 3 days. The extract was concentrated in the Rota- vapor at 60oC and subsequently in the water bath for evaporation of solvent for a period of 2 days. Aromatic brownish extract was obtained which weighed 27.9g. Total yield obtained was 11.6% w/w

The acute toxicity study of aqueous extract of Myristica fragrans seeds(MFAE) was done according to Organisation for economic co-operation and development(OECD) guidelines 425 limit test 12 at the dose of 2000mg/kg.

The MFAE was tested for solubility in distilled water, since it was soluble, distilled water was used as vehicle. The dose of MFAE was fixed to 200mg/kg after performing pilot study with 100 mg/kg and 200mg/kg. Since 200 mg/kg was better than 100 mg/kg, 200mg/kg MFAE was used as test dose. The required amount of test drug was calculated according to the body weight of animals and was administered orally for ten days. On 10th day, screening tests were performed one hour after oral drug administration. Standard drug used was diazepam.

23 wistar albino rats and 54 swisss albino mice were used for the study. They were grouped into three different groups containing six animals each. Following screening tests were conducted.

Swiss albino mice weighing 20-30g were used. Hole board apparatus measures 40 x 40cm in size with 16 holes of 3cm diameter each are evenly distributed. The hole board is elevated so that the mouse poking its nose into the hole does not see the bottom. Nose poking is considered as an indication of curiosity/ exploratory behaviour and is measured. One hour after the administration of test compound, the animals were subjected to tests for 5 minutes. The average count of nose poking of treated animals were calculated and compared with control and standard group.(Figure 1) 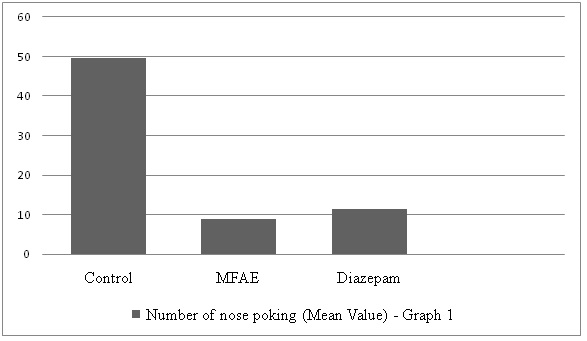 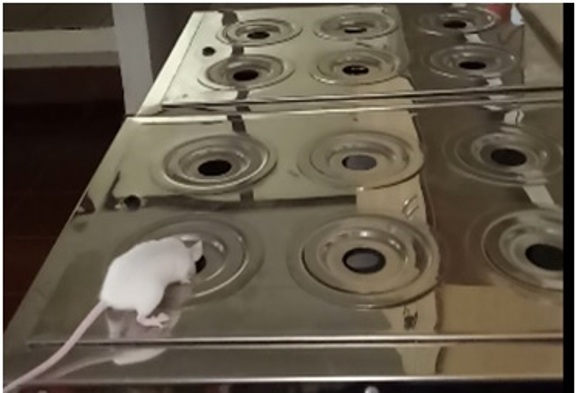 This test is to assess mobility or activity in the novel open field and emotionality of the animal. Wistar albino rats were used for the study. In an open field arena the motor activity of rats will be measured which is marked into 12 peripheral squares and 9 central squares. A rat when placed in the field explores the periphery normally. Activity or mobility in 5 minutes in the open field is quantified by keeping account of the number of squares crossed by the rats in the open field. Total number of squares crossed in different groups noted and compared. After each test arena was cleaned.(Figure 4) 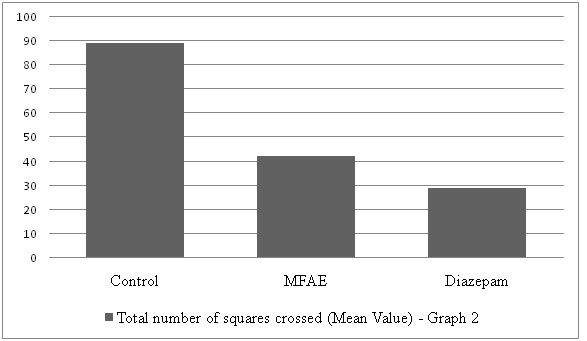 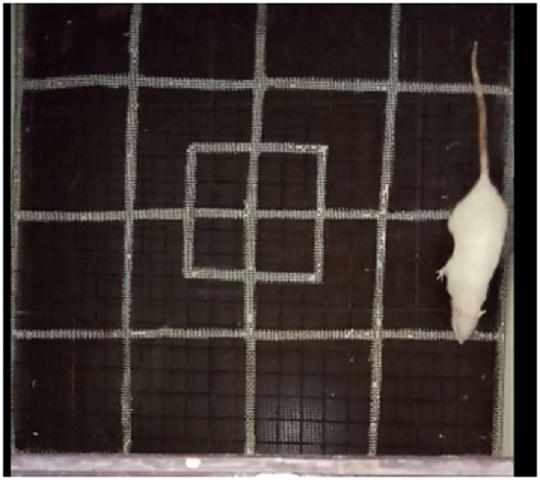 This test is performed using a horizontal rotation rod. Swiss albino mice undergo a pre test. Only those mice which can remain on the revolving rod for at least 60s were chosen for the test. 60min after oral administration of the test and standard drug the animals were placed on the rota rod for 1min. The number of animals falling from rota rod within the test period is calculated and it was compared with control.(Figure 6) 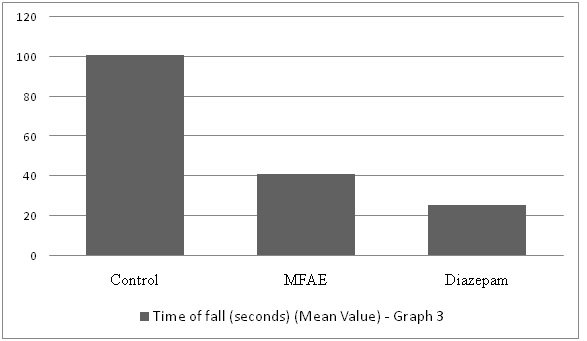 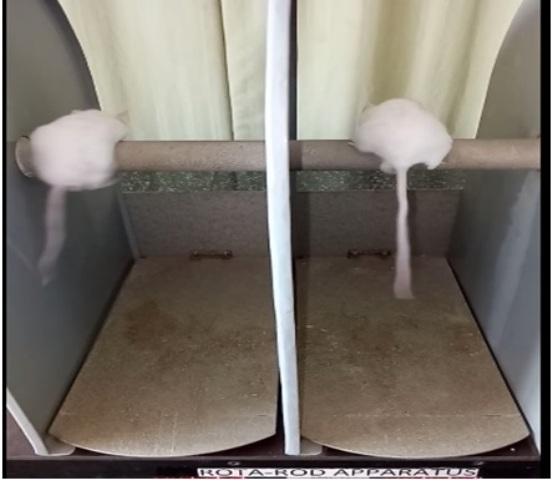 Swiss albino mice weighing 20-30g were used. 60 min after oral dosing of test drug and standard drug, thiopental sodium administered at the dose of 20mg/kg intraperitoneally.11 Animals were then placed on their back on thermostatically warmed pad. The duration of loss of righting reflex, starting from the time of administration of inducing agent, was measured until the animals regained their righting reflexes. (Figure 8)

Results of hole board test

Time of fall in MFAE treated group of mice was comparatively lesser than control group. The p value of MFAE showed < 0.001 compared to control which suggests it is highly significant. Compared to standard drug diazepam, p value was < 0.05 which was statistically significant.(Table 3), (Figure 5) 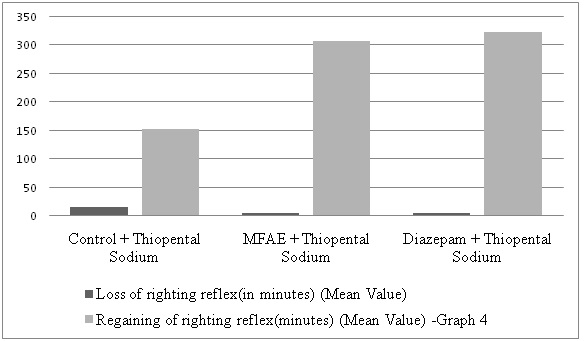 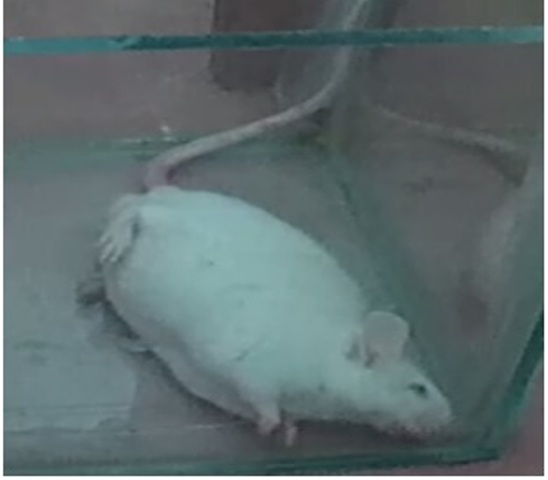 Insomnia is one of the common complaints independently seen or associated with physical or mental disorders. Many hypothesis explains the pathophysiology of insomnia. The neurotransmitters involved in sleep are GABA, serotonin, acetylcholine and norepinephrine. Literature suggests that by enhancing GABAergic transmission, one can modulate GABAA receptors, which can result in sedation and hypnosis.14, 15

The conventional sedative hypnotics like barbiturates and benzodiazepines act primarily at the GABA. They increase the GABA level which is an inhibitory neurotransmitter that lead to central nervous system depression. One of the main concerns is development of tolerance and dependence with these drugs.14, 15 So the plant based drug might have a better clinical efficacy and lesser side effect profile.

Hole board apparatus is used mainly to know whether the drug has got CNS stimulant or sedative property. Decrease nose poking in hole board suggest that there is some amount CNS depression and sedation.10 MFAE showed significant decrease in nose poking compared to control which suggests that some component in seeds of Myristica fragrans aqueous extract possess sedative property.

The open field is one of the most popular procedure to test the locomotor activity and animal behaviour. Different versions are available, however a simple version where the total number of squares crossed in 5 minutes gives sedative or CNS depressant effect of the drug. It was found that MFAE produced significant decrease in movements compared to control. This shows that the extract has got sedative property.

Rota rod test is used to evaluate drugs which interfere with motor co-ordination.10 The Swiss albino mice treated with MFAE lost their motor co-ordination earlier compared to control. This indicates that a component in the extract has got sedative property. The standard drug diazepam which is benzodiazipene also impairs motor co-ordination by acting on GABAA receptor. Since the MFAE action is similar to diazepam most probable mechanism of sedative activity is by activating GABA receptor and increasing the levels of GABA.

Potentiation of thiopental induced sleeping time is used to assess hypnotic activity of a drug.10 MFAE is increasing the sleep duration and also there is decrease in time latency of loss of righting reflex it can be concluded that the extract is having GABA enhancing property which lead to potentiation of sleep.

Phytochemical analysis of MFAE showed presence of flavonoids, saponins, tannins and alkaloids. Flavonoids have demonstrated anxiolytic, sedative and anticonvulsant activities. Studies have shown that these effects are mediated by ionotropic GABA, in particular GABAA receptors. It is already known that chalcone a type of flavonoid is positive allosteric modulator of GABAA receptor has got hypnotic effect.16, 17 The possible mechanism can be proposed as the chalcone a flavonoid component present in MFAE positively modulates GABAA receptor thereby increasing the levels of GABA, leading to sedative and hypnotic activity.17

Limitation of the study: Our study was a preclinical study invoving screening methods to evaluate sedative and hypnotic activity. Further studies on neurotransmitter levels will confirm the above findings.

Preclinical evaluation of the aqueous extract of nut meg seeds were done for sedative and hypnotic activity in rats and mice. Phytochemical screening was also performed to know the components present in it. Based on above result it can be concluded from this study that MFAE (Myristica fragrans seed aqueous extract) 200mg/kg shows significant sedative and sleep enhancing activity. Further isolation of flavonoid component from the extract will be helpful in confirming the above findings.

J Janssen G Lackman Nutmeg oil: identification and quantification of its most active constituents as inhibitors of platelet aggregationJ Ethnopharmacol199029217988

Guidelines OECD 425, Acute oral toxicity up and down procedure in OECD guidelines for the testing of chemicals, Organization for Economic Cooperation and Development 20012126