Turankar, Shetty, Pramoda N, Motghare, and Urade: To assess the rationality of pharmacotherapy of patient in clinical situations and validation of questionnaire tool used in rational pharmacotherapy

Methodology: A rationality scale was developed to check the coefficient of variation in each parameter of rationality, on a scale of 1 to 10, acronymed as R.A.T.I.O.N.A.L.I.T.Y.

Various clinical cases were discussed and treatment was criticised if any. These cases were then rated according to the rationality scale.

Results: For high rationality score, the top 5 parameter are availability of drugs, lab monitoring, rational combination, Protocol/Regime and if objectives of treatment fulfilled.

For low rationality, the lowermost 5 parameters were cost of therapy, irrational combination, lab monitoring, use of trade names instead of generic names and availability issues starting from the lowest.

Conclusion: Parameters like availability of the drugs, lab monitoring, presence or absence of irrational combinations are critical and common judgement parameters while judging if the therapy is rational or not.

Pharmacotherapy, that is, drug therapy, plays an important role in people’s health and their quality of life. However, there are increasing concerns with irrational drug use that can result in drug-related morbidity and mortality. These can increase the rate of adverse drug–drug interactions leading to additional cost and waste of valuable resources. The rapid increase in drug expenditure during the past decade, for example, has placed considerable pressure on healthcare systems.1

The concept of the rational use of medicines is an old one, dating as far back as 300 B.C, when the Greek physician Herophilus said that “medicines are nothing in themselves, but are the very hands of god if employed with reason and prudence.”2, 3 According to World Health Organisation (WHO) definition, rational pharmacotherapy (RPT) requires that patients receive medications appropriate to their clinical needs, in doses that meet their own requirements, for an adequate period of time, and at the lowest cost to them and their community.3 A multitude of factors have been found to lead to irrational use of drugs and these affect at various levels at which drugs are handled.4 According to World Health Organisation (WHO) estimates, more than half of all medicines are prescribed, dispensed or sold inappropriately, and half of all patients fail to take medicines prescribed to them correctly.5, 6

The word “ethics” is derived from the Greek word, ethos, which means custom or character. Ethics is an understanding of the nature of conflicts arising from moral imperatives and how best we may deal with them. It deals with the choices made and actions taken in relation to those choices.7, 8 It is concerned with the obligations of the doctors and the hospital to the patient along with other health professionals and society.9 Medical ethics also deals with the choices made by society, the distribution of resources, and access to health care, and the dilemmas arising from them.7, 10

The current study is an effort to construct a tool for measuring the rationality pertaining to the pharmacotherapy of patient. A wide variety of literature regarding various aspects of rationality has been searched through and 10 important domains namely.

To assess the rationality of pharmacotherapy of patient in clinical situations.

To provide a structured tool to assess rationality based on the 10 domains of Rationality score mentioned above.

A rationality scale was developed to check the coefficient of variation in each parameter of rationality. The parameters had been simplified on a scale of 1 to 10 based on subjective skills. In the middle of the scale 5 had been put as average. This was done because most of the subjective parameters were mentally judged on the basis of 0% to 100% and it was easy to quantify. These 10 parameters were acronymed as R.A.T.I.O.N.A.L.I.T.Y for the purpose of easy remembrance.

After formulating rationality scale, a trial version was tested. The post graduate students of Department of Pharmacology in a Tertiary Care Hospital presented various clinical cases as a part of their curriculum and criticised the treatment if any. These cases were discussed among professors, associate professors and lecturers and were then rated according to the rationality scale.

The analysis consisted of:

To assess the validity of the questionnaire tool the experts rated different aspects of the Questionnaire by answering 6 Questions rating 0 to 10 for each question in the online form. Faculty members with more than 5 years of experience from various colleges in the field of pharmacology have been considered to rate the scale.

Overall we received 39 responses from the experienced pharmacologist who are the senior faculties of pharmacology. Approximately 90% of the faculties had an experience of more than 10 years.

High rationality score - score greater than and equal to 6

*Top 5 parameters to be considered) 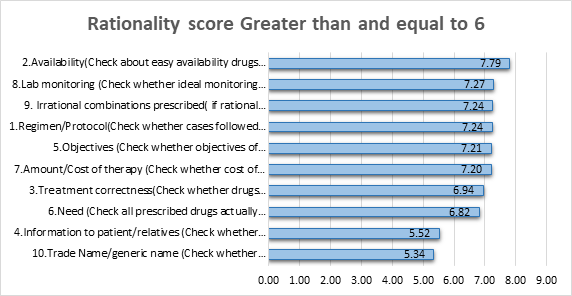 Average rationality score – score greater than 4 and less than 6

*Top 5 parameters to be considered) 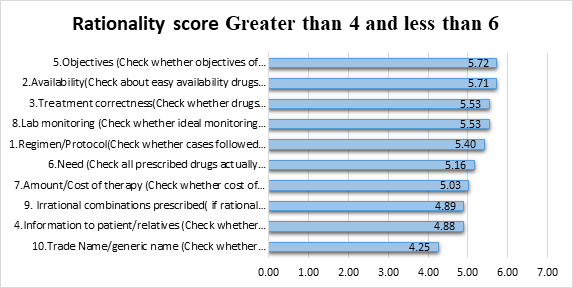 Low rationality score – less than and equal to 4

*Lowest 5 parameters to be considered) 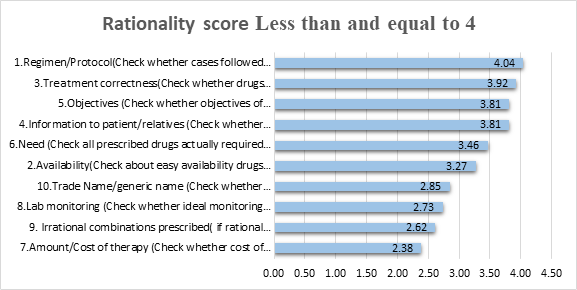 For higher rationality score, that is score greater than and equal to 6 which means when the assessors judged the rationality score to be high, the top five parameter are availability of the drugs, lab monitoring, presence of rational combination, if the pharmacotherapy was as per Regime or protocol and if the therapy had an objective of treatment.

For average rationality scores, the top 5 parameters are if the therapy had objective of treatment, the availability of drugs, treatment correctness, lab monitoring and last if the pharmacotherapy was as per resume of protocol.

For low rationality score, that is less than and equal to 4 the lowermost 5 parameters were, cost of therapy, presence of irrational combination in the therapy, if lab monitoring was done properly, use of trade names in place of generic names and availability issues starting from the lowest.

We can conclude from the above results that some parameters are given critical importance while judging the rationality score as high, low or average. These common parameters are availability of the drugs, lab monitoring, presence or absence of irrational combinations.

The other important judgement criteria were whether the treatment protocol and regimens were followed or not, presence of objectives for the treatment, treatment correctness and use of trade names while prescribing.

On the whole on majority of the parameters the scale was valid to the extent of 80 to 87% on various different parameters.

Reliability of rationality score over time and within assessors needs to be evaluated in future studies.

Despite this encouraging judgement and response by the senior faculties they came up with various promising suggestions.

One of the suggestion related with the question number 4 was that information of the prescription should be given to the patient and their relatives in their vernacular language. There was one very good suggestion by a senior faculty that the clinicians should also be involved in this prescription rationality analysis. So that it becomes realistic and pragmatic. One recommendation was that regular rationality checks like this will help the cause of rational pharmacotherapy in the long run. Similarly it was suggested that this particular scale is good for detecting the gross rational behaviour than one of incidences which can be exceptions. One of the senior faculty suggested to weigh these various different parameters differently because rationality cannot be scored equally. Some of the important parameters may have different weightage than the others, so it should be taken into account while formulating such a scale.

Parameters like availability of the drugs, lab monitoring, presence or absence of irrational combinations are critical and common judgement parameters while judging the therapy as rational or not. In future these rationality score parameters may be useful for judging the rationality of the prescription behaviour of physician or the hospital etc., but it needs to be evolved over a period of time and scientifically validated as well.

In the absence of any standardised validated rational pharmacotherapy assessment scale, the present scale cannot be correlated with any gold standard scale. The above findings pertaining to validity are standalone with respect to present scale.

The researchers are keen to incorporate these various suggestions into their subsequent versions of the rational pharmacotherapy scales in the times to come.