Background: Many indigenous medicinal plants with natural neuroprotective and antioxidant properties have shown to be beneficial in a variety of behavioral disorders such as anxiety disorders.

Objective: To screen the Ethanolic and aqueous extracts of Piper betle L.leaf for its antianxiety activity in Swiss Albino mice.

Materials and Methods: Ethanolic and aqueous extracts of Piper betle L. leaf [PBEE and PBAE] at doses 100 mg/kg and 200 mg/kg were compared with standard (Diazepam 1mg/kg) and control (distilled water). Six Swiss albino mice (3 each of both sexes) weighing 25-30g were used for each group. Level of anxiety was studied using the behavioural models Elevated Plus Maze [EPM] and Light Dark Arena [LDA]. Phytochemical analysis of the extracts was done and compared.

Results: PBEE 100mg/kg has shown significant increase in time spent in open arm and number of entries to open arm when compared with control in EPM model. The same dose was found to be significant for time spent in bright area and number of bright area entries in LDA model. On the other hand the PBAE doses were not significantly different from the control. Preliminary phytochemical screening showed the presence of bioactive component flavonoids in both the extracts, but saponins were absent in aqueous extract.

Conclusion: The ethanolic extract of Piper betle L. at a dose of 100mg/kg has showed significant antianxiety activity.

Anxiety disorders are present in 15-20% of medical clinic patients, which makes it the most prevalent psychiatric illness in the general community. Anxiety is a feeling of fear, apprehension and uncertainty. It is a distressing state of tension with an anticipation of impending danger and can be defined as a subjective sense of unease, dread, or foreboding, can indicate a primary psychiatric condition or can be a component of, or reaction to, a primary medical disease.1 The current allopathic framework utilizes benzodiazepines, antidepressants and azapirones for antianxiety medication, but are having limitations like unfavourable energy, withdrawal side effects on sudden stoppage of the medications, intellectual, and psychomotor debilitation and gastrointestinal side effects.2 Thus there is a need for alternatives in the treatment of anxiety disorders such as medicinal plants and plant-based formulations which are effective, cheaper as well as with lesser risks of side effects, dependence and abuse potential.

The medicinal plant Piper betle L., which is commonly found in humid and tropical regions of South India, has been reported to have a neuroprotective effect in rats.3 Betel leaf has various medicinal properties like antioxidant, anti-bacterial, anti-fungal, anti-inflammatory, anti-diabetic, gastroprotective, radioprotective activities and contraceptive effects as revealed from past studies. The previous studies have shown a neuroprotective action in Hydroalcoholic extract of Piper betle leaf in mice but it was not comparable to standard drug.4 This could be due to the inadequate quantity of the concerned bioactive constituents in the used extract. Hence to confirm the antianxiety properties of Piper betle leaf, two other types of extracts viz., ethanolic and aqueous were proposed and the effects were compared.

Adult Swiss albino mice of either sex of 3-4 months of age, weighing 25-30g were used for the study. They were housed in clean polypropylene cages under standard housing conditions with free access to standard pellet diet and water ad libitum. The mice were marked with haematoxylin stain for the purpose of identification and were handled as per CPCSEA guidelines.5 The study was conducted in the Ethnopharmacology lab, Department of Pharmacology, Yenepoya Medical College, Mangalore after obtaining Institutional animal ethics committee (IAEC) clearance (5/9.6.2016).

The dried powdered betel leaves weighed around 122g. It was wrapped in a muslin cloth and extracted using 95% ethanol v/v in Soxhlet apparatus maintained at around 60oC - 70oC for period of 3 days.6 The extract was filtered, concentrated under reduced pressure and dried using Rota-vapour at 60oC and subsequently in the water bath for evaporation of solvent for a period of 3 days. Aromatic greenish extract was obtained which weighed 16.7g. The yield of betel leaves obtained was 13.65% w/w.

The dried powdered leaves weighed around 122g. It was wrapped in a muslin cloth and extracted using distilled water (1000ml) as solvent in Soxhlet apparatus. The solvent was heated at 70oC - 80oC to reflux for a period of 23 hours. The obtained extract was concentrated using Rota-vapor and water bath for evaporation of solvent for 3 days.7 Brownish extract weighing 15.20g was obtained. The yield of leaves was 12.4% w/w.

The acute toxicity study of ethanolic and aqueous extract of Piper betle leaves was done according to OECD guidelines 425 limit testat the dose of 2000mg/kg.8 A single dose of 2000mg/kg of PBEE and PBAE was administered orally to five female Swiss albino mice (fasted overnight) each. Animals were observed individually once during the first 30 minutes after dosing, hourly in the first 4 hrs, at 24hrs and daily thereafter, for a total of 14 days. Changes appearance, general behaviour and movement and mortality were observed. The highest dose of PBEE and PBAE (2000 mg/kg) in mice did not cause any behavioural changes or mortality which implies that LD50 of each extract is above 2000mg/kg. Accordingly, the dose was fixed at 100 and 200 mg/kg for each of the extract for comparison.

Number of experimental animals used was 72: Animals were divided into 12 groups of size 6; Antianxiety activities were observed in two experimental models: Elevated Plus Maze (EPM) and Light Dark Arena (LDA). All the experiments were carried out in the Etho-chamber (Figure 1) which is a fabricated dark and sound proof chamber.

From the 12 groups of animals formed, 6 at random were used for the EPM model and the remaining 6 groups were used in LDA model. The following six types of drugs and doses were compared in EMP and LDA models:

The groups were treated with vehicle (Distilled water), test PBAE and PBEE (100mg/kg and 200mg/kg each) and standard drug Diazepam. The required amount of test drug was calculated according to the body weight of animals and was administered as once a day dose (O.D), per orally (p.o) for 14 days. On the 14th day, one hour after oral administration of drug, animals were animals were screened for antianxiety activity.

EPM consists of two open arms and two closed arms that are interconnected by central platform (Figure 2). It combines three factors that are considered to be anxiogenic –novelty, height and open space. The EPM was suspended 50cm above the ground level.10 Each mouse was placed in the central platform facing one of the closed arms and observed for 5 minutes. The animal when placed in EPM, develop fear due to height which induces anxiety. Eventually it manifest as decrease in the motor activity and preference to remain at safer and dark places. Whereas, anxiolytic agents are expected to increase the motor activity, which is measured by time spent in open arms and closed arms and number of entries to open and closed arm during the 5 minute test.

One way analysis of variance (ANOVA) was used for simultaneous comparison test drugs and for significant variables Tukey Kramer test was used for pair-wise comparisons with level of significance P = 0.05. The statistical analysis was carried out using the software SPSS v24.0.

Phytochemical screening of ethanolic and aqueous extracts of Piper betle leaves are shown in Table 3. The Lead acetate test indicated the presence of flavonoids, a bioactive compound in both type of extracts. However, glycosides (Keller Killiani test), saponins (Foam test) and phytosterols (Salkowski’s test) where not found in PBAE.

The etho-chamber used for the experiments 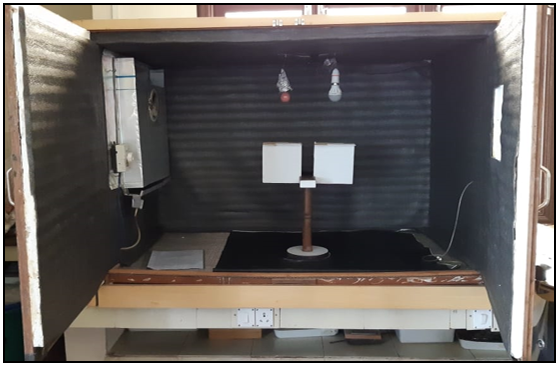 The elevated plus maze 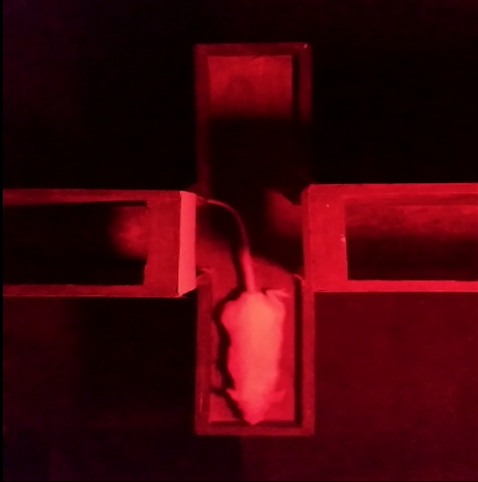 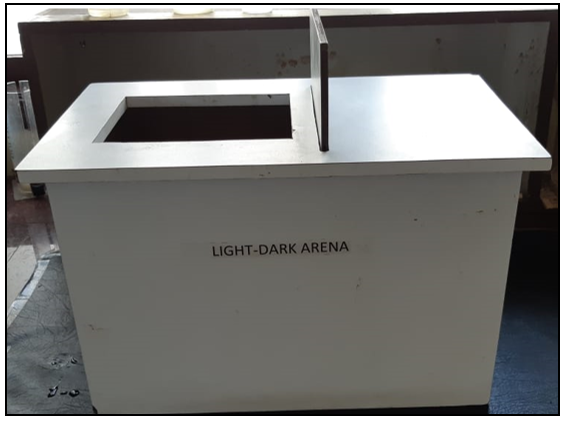 Current allopathic treatment for anxiety disorders are reported to have many limitations such drug dependency, sedation, muscle relaxation, memory disturbance and unwanted drug interactions. Thus, there is a need to investigate alternatives especially with known medicinal plants.12 One such potential medicinal plant is Piper betle L. which is reported to have many therapeutic uses.

Flavonoids and saponins are known to have prominent anxiolytic effect.13 Flavonoids were present in both ethanolic and aqueous extracts of betel leaf, but few other phytochemical constituents were not seen in aqueous extract, especially the saponins. Flavonoids have affinity to central benzodiazepine receptors, bind to gamma-amino butyric acid - GABAA receptor and pharmacologically act as a partial agonist.14, 15 Saponins effects through regulating neurotransmitter mechanism (5-Hydroxytryptamine, Dopamine, Norepinephrine), modulation of the GABA neurotransmission, glutamatergic system, hypo-thalamus-pituitary-adrenal (HPA) axis, brain-derived neurotrophic factor (BDNF), and its intracellular signalling pathways in the central nervous system.16 Presence of saponins is probably the factor attributing to enhanced anxiolytic activity of ethanolic extract of betel leaves when compared to the aqueous extract. The usefulness of PBEE for treating anxiety disorders however needs isolation of bioactive compound(s) and molecular level information on pharmacological activities. Clinical studies are also required to confirm the safety, efficacy and adverse effects in humans.

The results of the study confirm the antianxiety properties of Piper betle L. The ethanolic extract has advantage over aqueous extract according to the observations on behaviour of Swiss albino mice in Elevated Plus Maze (EPM) and in Light Dark Arena (LDA) models. However, the difference between the two doses tried (100mg/kg and 200mg/kg) has not shown much difference in either of the extracts. The difference in response seen between the two types of extracts on mice could be due to quantitative difference in the phytochemicals available in the extracts or absence of some that are attributing the antianxiety properties.

The study was approved by the Institutional Animal Ethics Committee.

Authors would like to thank all staff of Department of Pharmacology, Yenepoya Medical College, Mangalore, Karnataka, for their valuable support in carrying out this research work.

Committee for the Purpose of Control and Supervision of Experiments on Animals.Cpcsea guidelines for laboratory animal facilityIndian J Pharmacol20033525774