The PAEs of ciprofloxacin against Salmonella dublin, E. coli, Pasteurella multusida and Staphylococcus aureus were determined. Growth curves of the organisms were constructed with and without addition of antibiotics and the two curves were compared. The longest PAE when it was subjected to an antibiotic (1 µg/ml ciprofloxacin) was observed against Staphylococcus aureus (6 hours) and the shortest was against Pasteurella multocida (1–2 hours), whereas the PAE of 4 hours was found for Salmonella dublin. E. coli was found to be resistant to ciprofloxacin in all phases.

Postantibiotic effect (PAE) is the continued suppression of bacterial growth after exposure of the bacteria to an antimicrobial agent and removal of this agent from the environment (Craig and Gudmundsson (1996)1 and MacKenzie and Gould (1993).2 The PAE was recognized as an important pharmacodynamic parameter (Craig and Gudmundsson, 1999)3 and it is a standard metric used to evaluate novel antibiotics (Beam et al, 1992).4 The postantibiotic effect (PAE) refers to the temporary suppression of bacterial growth following transient exposure to antibiotics. This transient inhibition has been observed since the first studies of penicillin against Pneumococcus and Streptococcus in the 1940s. Even after the antibiotic had been degraded by a penicillinase, the target populations exhibited a significant lag before resuming growth (Bigger, 1944 and Eagle and Fleischman, 1950).5

The term postantibiotic effect (PAE) refers to a period of time after complete removal of an antibiotic during which there is no growth of the target organism (Craig and Gudmundsson 1991).

In this study, the PAEs of ciprofloxacin against different species of bacteria were examined.

The bacterial cultures were supplied by the department of Microbiology, Faculty of veterinary Medicines, University of Khartoum. The bacterial species were: Pasteurella multocida, E. coli (isolated from urine), Salmonella duplin (reference strain NCTC 5766) and Staphylococcus aureus (isolated from rectal swab). 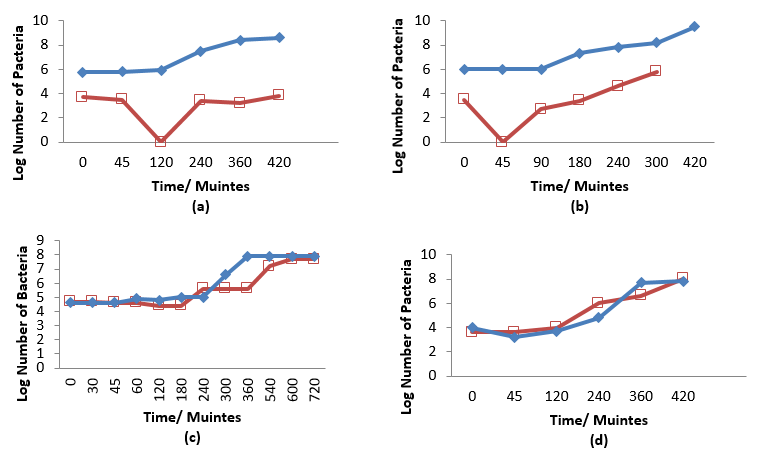 All species in this study were identified according to Barrow and Feltham (2003)6 and also test kits (quick GN, NISSUI) were used for the identification of Gram-negative bacteria.

Ciprofloxacin was received as a dry laboratory powder and it was dissolved and obtained at concentration of 1μg/ml.

The growth (measured in log10 CFU/ml) for all species was performed in nutrient broth. Six tubes were labeled from time zero, 45minutes, 2 hours, 4 hours, 6 hours and 7 hours, the viable count was performed according to Miles and Misra (1938).7

The growth curve of the control was compared with the curve of the organism after subjected to the antibiotic (ciprofloxacin). The control tubes and antibiotic-containing tubes were incubated at 37°C.

The study of the delayed regrowth of surviving bacteria following cessation of antibiotic administration, the post-antibiotic effect (PAE), and related phenomena such as the integration of the pharmacological and antimicrobial profiles of drugs became known as pharmacodynamics and is increasingly being applied to the design of dose regimens (MacKenzie and Gould 1993).8

The results of this study were asserted with Chin and  Neu (1987)9 who’s mentioned that the ciprofloxacin produced an excellent PAE for most gram-negative bacteria and for S. aureus. The longest PAE in this study was observed when using ciprofloxacin against Staphylococcus aureus (6 hours). Also Licata, et al., (1997)10 found that a pronounced suppression of bacterial growth extending to 4.8 and 6.5 hours was seen with exposure to ciprofloxacin at one-eighth and one-fourth the MIC of ciprofloxacin for S.aureus.

Our results were confirmed by Schierholz et al. (1998)11 as they reported that antimicrobial agents are generally tested against bacteria in the log phase of multiplication to produce the maximal bactericidal effect. From the above results, in the log phase the bacterial cells are more fragile since they are dividing in an accelerated rate and this makes the cells of the bacteria more susceptible to antibiotics and they will be more susceptible to external environment.

The PAE for Salmonella dublin when it was subjected to an antibiotic (1µg /ml ciprofloxacin) was “2 hours” which represents the beginning of the log-phase. It was observed that at time “2 hours” the number of bacteria decreased and reached zero. Majtán  and Majtánová, (1997)12 was observed the longest PAE result with Salmnella typhimurium after treatment with ciprofloxacin in compared with other antibiotic.

Over the past three decades, quinolone resistance in Enterobacteriaceae from human and veterinary isolates has increased (Rodríguez-Martínez et al., 2016b).13 Therefore, this result supported our findings that the E. coli was found to be resistant to ciprofloxacin in all phases.

In the present study, the in-vitro PAEs of ciprofloxacin determination against different species of bacteria (Salmonella dublin, Pasteurella multusida and Staphylococcus aureus were found to be ranged between 1-6 hours for all species. The E.coli found to be resistant in all growth phases.