Singh, Singh, and Singh: A review on kalanchoe pinnata (Crassulaceae)

A review on kalanchoe pinnata (Crassulaceae)

Medicinal plants have been valued for millennia as a rich source of medicinal substances for the prevention of illnesses and afflictions all over the globe.1 Kalanchoe pinnata (Crassulaceae) is an erect, succulent perennial shrub that grows to be approximately 1.5 metres tall and reproduces both vegetatively and via seeds. It features tall hollow stems, black bell-like pendulous blooms, and newly dark green leaves that are scalloped and trimmed with red. This plant may be readily propagated by cutting stems or leaves.2, 3

Cathedral Bells, Air Plant (USA), Life Plant, Miracle Leaf, Goethe Plant, and Katakataka are some of the common names for this plant.

The Phytoconstituents of plants shown in Table 1 and classified with compounds.

Worldwide traditional used of plant are shown in Table 2

In the folk medicines of India's Bundelkhand region, the juice of fresh leaves is extremely useful for curing jaundice. The ability of the leaves' juice and the ethanolic extract of the marc left over after expressing the juice to protect against CCl4-induced hepatotoxicity was evaluated in rats. In vitro, in vivo, and histology studies revealed that the test chemical was hepatoprotective. The juice was shown to be more effective than the ethanolic extract.22

Antihistamine and antiallergic effects are found in the plant. Methanol extract from the leaves has also been found to inhibit histamine receptors (H1) in the ileum, peripheral vasculature, and bronchial muscle, thus guarding against chemically induced allergic reactions and death by selectively inhibiting histamine receptors in the lungs. Quercetin-3-o—Larabinopyranosyl (12) Obaseiki- Ebor et al. found that organic solvent extracts of leaves inhibited His — to His + reverse-mutations caused by ethyl methanesulfonate acting on S. typhimurium TA100 or TA1002, as well as reversions caused by 4nitro-o-phenylenediamine and 2-aminofluorene in TA98. The alkaloidal/water soluble and acid fractions have no apparent antimutagenic efficacy.23

In this research, the incidence of ulceration and mean basal and histamine induced stomach acid production were significantly reduced in a dose-dependent manner, supporting its usage as an anti-ulcer drug in traditional medicine.24

The presence of zinc in the plants may indicate that they could be useful in the treatment of diabetes caused by insulin dysfunction. The antinociceptive effect of the herb's aqueous leaf extract was tested in mice using the 'hot-plate' and 'acetic acid' pain models. Fresh egg albumin-induced pedal oedema and streptozotocin-induced diabetes mellitus were used to test the plant extract's anti-inflammatory and anti-diabetic properties in rats. In mice, the aqueous leaf extract had substantial antinociceptive effects (P0.05-0.001) against thermally and chemically generated nociceptive pain stimuli.

In rats, the plant extract reduced fresh egg albumin-induced acute inflammation and caused substantial hypoglycemia (P0.05-0.001). The herb's flavonoids, polyphenols, triterpenoids, and phytosterols are thought to be responsible for the plant's antinociceptive, anti-inflammatory, and antidiabetic effects. It is thought to have antinociceptive and anti-inflammatory properties by reducing the release, synthesis, and/or production of inflammatory cytokines and mediators such as prostaglandins, histamine, polypeptide kinins, and others.25

The phytotherapeutic tocolytic action of in human myometrium in vitro against the standard betamimetic, fenoterol Contractility was assessed in strips of term myometrium biopsied at caesarean section and subjected to escalating concentrations of B.Pinnatum vs +/- oxytocin 1 U/l in 14 women. The suppression of spontaneous contraction in the result state was concentration dependant. B. Pinnatum raised contraction frequency by 91% at constant amplitude while inhibiting oxytocin-stimulated contractions by 20% at constant amplitude but with a somewhat lower frequency. Fenoterol reduced contraction by 50% with a substantial reduction in frequency.26

The ethanolic extract of K. pinnata demonstrated substantial wound-healing activity by reducing the size of the affected region and oedema at the wound site. This may be because steroidal glycosides and phenolic antioxidants are present.27 Water, petroleum ether, and alcoholic extracts of the plant were shown to have the ability to cure wounds in a research. Water extract was likewise shown to be more active than the other two extracts in the research.28

The leaves were reported to show maximum scavenging effects than stems and the ethanolic extract showed more total phenolic and flavonoid content than other extracts. The high amount of phenols and flavonoids in the extracts may be the reason for their high antioxidative activity (Bhatti et al., 2012). The phenolic constituents have the ability to interact with the transition metals even in lipid phase and chelate them by filling their aqua-coordination sites and generating metal-coordinated insoluble complexes. Inhibition of lipid auto-oxidation could be attributed to the ability of phenolics to stabilise the radicals through generation of stabilised phenoxyl radicals by directly scavenging peroxyl radicals.29

The plant's anticancer properties was investigated. The intake of the aqueous extract for N-diethylnitrosamine (DENA)-induced hepatocarcinogenesis in rats reduced liver damage, according to the findings. The protective effect may be attributed to antioxidant and antiperoxidative properties, as well as the capacity to rectify anomalies in lipid and lipoprotein metabolism by increasing the activity of a few lipid metabolising enzymes. DENA's metabolism in the liver tends to produce free radicals, disrupting antioxidant status and eventually contributing to oxidative stress and carcinogenesis, which is why it's classified as a significant environmental hepatocarcinogen. Histopathological study of DENA-treated rats' liver sections revealed severe centrilobular necrosis and vacuolisation. The aqueous extract neutralised free radicals, decreased necrosis, and protected hepatocytes against DENA's carcinogenic effects.31

The anticancer and anti-HPV properties of the plant's chloroform extract were investigated in a research. When the extract fractions were applied to cancer cell lines, they inhibited the production of viral proteins, limiting both viral and tumour development. The Epstein-Barr virus is a herpes virus that infects human B-lymphocytes, causing tumours to develop32

The antibacterial activity of K. pinnata was investigated, and it was shown that the methanolic extract had a higher inhibition rate. Bacteria that cause skin infections may also cause respiratory illnesses, food poisoning, wound infections, abscesses, osteomyelitis, endocarditis, pneumonia, and other problems when they enter the body. As a result, the produced extract may fight such illnesses and save the lives of those who are afflicted. The information provided may be utilised to create a commercial antibacterial and antifungal cream.33

Leishmaniasis is caused by protozoans of the genus leishmania. Mice infected with leishmania amazonensis were administered an aqueous extract of K. pinnata. Following the experiment, a few findings were recorded, including the lesions shrinking in size and the parasitical load in the affected region. Continuous treatment with the extract not only slowed the development of the bacteria, but also stopped them from spreading. This technique may potentially be used to treat visceral leishmaniasis, according to some.34

The methanolic extract of K. pinnata yielded two bufadienolides. The inclusion of the 1, 3, 5-orthoacetate moiety of the bufadienolides was shown to be responsible for the isolated compounds' significant insecticidal action against silkworm third instar larvae.35

The impact of plant extract on hyperthermic conditions in experimental animals was shown. Brewer's yeast was used to cause pyrexia in rats.When K. pinnata hydroalcoholic extract was given to laboratory specimens, it lowered body temperature, demonstrating its antipyretic activity. This action may be due to the presence of flavonoids in the extract.36

Calcium oxalate stones develop when oxalate excretion in the urine is decreased. On the basis of medical prophylaxis, fresh juice produced from the leaves of K. pinnata was given to patients with stones in their bodies. The juice, when consumed on a regular basis, successfully dissolved the stones, regardless of their location, nature, or prior treatments. The amount of urine voided increased, demonstrating the juice's diuretic properties. It also aided in the reduction of oxalate excretion while boosting citrate excretion. According to this research, the juice may have antilithiatic effects.3 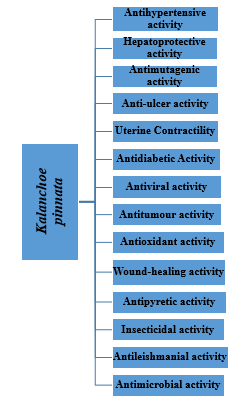 In mice, an aqueous extract of grasses produced a substantial reserve of cell-mediated and humoral immunological responses. The spleen cells of mice pre-treated with herbal extract had a limited capacity to proliferate in vitro in response to both mitogen and antigen. By almost completely eradicating the Ddelayed-type hypersensitivity reaction, the in vitro and topical techniques of directing were the most effective. The intraperitoneal and verbal methods, respectively, decreased the response by 73 percent and 47 percent of controls. The precise antibody responses to ovalbumin were also summarized in a meaningful way by handling. As a result, the immunosuppressive properties of the aqueous extract of leaves are preserved. The lymphoproliferative tests were used to categories the immunosuppressive components found in Panphuti. A cleaned fraction (KP12SA) derived from the ethanolic extract was 20 times more effective than the crude extract in inhibiting murine lymphocyte explosion. As a consequence, the provides evidence that basil's saturated fatty acids have a substantial effect on lymphocyte proliferation, elucidating its immunosuppressive effect in vivo.38

The effects of cardiac glycoside poisoning in calves fed flower heads of hybrid Bryophyllum species were studied, and it was discovered that for each plant (except Bryophyllum tubiflorum), two calves were given a single dosage of 20 g wet weight per kg body weight.

The findings of the calf toxicity experiment, together with the quantities of bufadienolide found in the plants, indicate that bryotoxins A, B, and C are most likely to blame for the illness.41

Ascorbic acids, riboflavin, thiamine, and niacin are all abundant in the plant.Natural ascorbic acid is essential for body function, which includes the proper synthesis of intercellular components such as collagen, bone matrix, and tooth dentine throughout the body. As a result, the clinical symptoms of scurvy, such as bleeding from the mouth, gastrointestinal tract, anaemia, and joint aches, may be linked to the relationship between ascorbic acid and proper connective tissue metabolism.42

The cytotoxic impact of an ethanolic extract of B. pinnatum leaf on cells of the rat testis was investigated at two dosages (100 mg/kg and 200 mg/kg) given orally for eight weeks. When compared to the control group, which showed intact normal histological features of the testes, the seminiferous tubules shrank and intracellular spaces were seen within the epithelium at a dose of 100 mg/kg, and a higher dose (200 mg/kg) showed a marked increase in intracellular spaces within the germinal epithelium and a reduction of spermatozoa.43

The plants are well-known and have long been believed to be medicinal. It is hoped that the comprehensive information provided in this study on the plant's phytochemical components and different biological characteristics of extracts and constituents would provide an impetus to evaluate the plant's application in medicine. The pharmacological potentials of K. pinnata which is extremely useful to researcher to know more about this important plant.

Some magnetic is land plants2014http://www.somemagneticislandplants.com.au/index.php/plants/396-bryophyllum-pinnatum

S Ghasi C Egwuib P U Achukwu J C Onyeanusi Assessment of the medical benefit in the folkloric use of Bryophyllum Pinnatum leaf among the Igbos of Nigeria for the treatment of hypertension. AfrJ Pharm Pharmacol2011518392