In the present study we have selected antioxidants agents like Pioglitazone and Ascorbic acid were subjected for anti-cataract activity by in vitro glucose induced cataract model. In the procedure, goat lenses was incubated along with the aqueous humor solution containing 55mM glucose with Enalpril as a standard compound and Pioglitazone with varied concentration for the time interval of 72 hours at room temperature. There was a formation of blur layer on the goat eyeball occurs after 10-12 hours and this process complete after 72 hours. The cataract inducing lenses showing higher level of Na+, MDA (P<0.001) along with the decreases in sodium-potassium ATPase activity and water-soluble protein content. The goat lenses treated with Ascorbic acid 40 µg/ml and Pioglitazone in concentrations of 15, 30, and 60 µg/ml showed increased protein content and prevent the formation of cataract.

The disease cataract is the opacification of lenses frequently occurs in diabetic patient with old age because of increased levels of glycosylated haemoglobin are involved in increased risk of cataract formation.1 Many cataract inducing factors have been reported according to the various experimental data; the biochemical reason of cataractogenesis is still not clear till date. The cataract occurs because of multiple factors, mainly happen due to the protein aggregation on the eye lenses. The lenses Na+ — K+ -ATPase activity shows very important action in maintenance of transparent nature of the lens, and its imbalance leads to deposition of Na+ and loss of K+ with water absorption of the lens fibres leading to cataract formation.2 Numbers of drugs have been already used for treatment of cataract but not a single from them proved useful treatment of cataract.3 The aldose reductase is enzyme probably plays a role in the development of this eye problem like cataract.4 The aldose reductase show its action on sugar molecules like glucose, galactose and xylose and convert them into their respective alcohols by biochemical pathways these alcohols are known as polyols accumulate within the lens there by producing osmotic effects. Hence polyols does not have a capacity for diffusing out easily nor metabolizes rapidly and causes hyper tonicity responsible for formation of cataract.5 The oxidative mechanism also plays a crucial role in biological phenomena including cataract formation. The formation of superoxide radicals in the aqueous humour and in lens, lens and its derivatization to other potent oxidants may be responsible for initiating various biochemical toxic reactions leading to formation of cataract.6 Angiotensin converting enzyme inhibitors have been shows protection from free radical damage in many experimental procedures.

Goat eyeballs used for the study were collected from the local slaughterhouse and stored at 0-40 C.

The glucose solution having concentration 55mM was used for the cataract formation. Higher concentration of glucose metabolizes by the sorbitol pathway. Cataract was formed due to the accumulation of polyol (Sugar + Alcohol) which causes oxidative stress and over-hydration which forms cataract. All these lenses were incubated in aqueous humour which is artificially prepared with different concentration of Glucose for 72 hours.

The electrolyte Sodium and Potassium (Na+ and K+) was estimated by using flame photometry. The sodium Potassium ATPase activity was performed by using Unakar and Tsui method9 and estimation of protein was done by Lowry's method.10 The oxidative stress level was analysed by Wilbur’s method.11

The all experimental data was shown as mean ± SEM. The whole data was evaluated by analysis of variance (ANOVA) and then post hoc- Dunnett’s test using Graph Pad Prism software, version 4.02.

After all experimental procedure lenses were placed on graph paper with the posterior surface touching the graph and observed by using magnifying lens. All the 5.5 mM Glucose (Normal lens), 55 mM Glucose (Cataract induced lens), 40 µg/ml Ascorbic acid (Standard) were analysed by placing on graph paper. All other three lenses treated with Pioglitazone with concentrations of 15, 30 and 60 µg/ml respectively as shown inFigure 1. 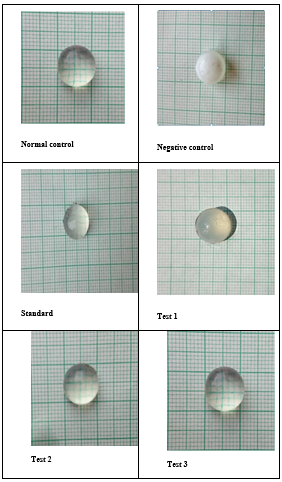 Pioglitazone significantly protected the lens morphology and activity and clarity: 50% of the eyes had almost clear lenses; in contrast, 100% of the negative control eyes developed dense nuclear opacity. From the current study, it is evident that Pioglitazone protects the lens against oxidative stress. These results in glucose-induced cataracts in vitro studies not only demonstrate the protective effect of Pioglitazone but also indicate that it prevents cataractogenesis by virtue of its antioxidant properties. Pioglitazone, therefore, may be useful for prophylaxis or therapy against cataract. After 72 hr. of incubation in glucose 55 mM, the lens becomes completely opaque as against lenses in normal control. Incubation of lenses with Pioglitazone and ascorbic acid both the concentrations were used, which seem to retard the progression of opacification compared with lenses incubated in glucose 55 mM (Negative Control). The effect of Pioglitazone on the positive control groups, showed considerable retardation in the progression of lens opacification and which is near normal when compared to negative control.

In the present work, Pioglitazone treated group shows the increase in protein content (water-soluble) by prevention of cataractogenesis. This cataract is due to the higher glucose concentration. Pioglitazone shows anticataract activity due to presence of antioxidant activity and prevention of the cataract forming factors.

We are thankful to Dr. Vithalrao Vikhe Patil Foundation’s College of Pharmacy, Viladghat, Ahmednagar, Maharashtra, India for providing laboratory facility for this work.