Sindhusha, Satyavathi, Pragnasai, Deepika, Kumar, and Annapoorna: A study of risk score assessment in antenatal women and their neonatal outcome in a tertiary care hospital

Introduction: A high-risk pregnancy is any condition associated with a pregnancy where there is an actual or potential risk to the mother or fetus. Risk assessment is a key component of antenatal care (ANC) and has demonstrated benefits in improving maternal and perinatal outcomes.

Objectives: To assess maternal complications that occurs in antenatal women and their neonatal outcomes in a tertiary care hospital.

Materials and Methods: 200 antenatal women, admitted to obstetrics & gynaecology department from 16-09-2020 to 15-03-2021 were evaluated. Antenatal women with maternal complications (Gestational hypertension, preeclampsia, Gestational diabetes, Hypothyroid, Anaemia, Asthma and oligohydramnios) were taken into study group and women with no complications were taken into control group. The risk factors were assessed and risk scores were determined by Dutta and Das scoring system and Hobel risk scoring system.

Results: It was found that there was a significant association between poor neonatal outcome and high-risk pregnancies. The incidence of preterm births is higher in the study group (34.1%) when compared with the control group (13.7%). Mode of delivery was predominantly by caesarean section in the study group (p<0.005). Neonatal complications were significantly more (p<0.05) in study group and fetal distress was exclusively seen in the study group (p<0.0005). Maternal complications such as eclampsia correlated significantly with the risk score (p=0.005). Neonatal outcomes such as Low birth weight (p<0.0001) were higher in the high-risk category when compared to the low risk and moderate risk category.

Conclusion: There was a significant correlation between high-risk antenatal and poor neonatal outcome. Scoring systems, such as the one used in our study, can be adopted at primary and rural health centres even by a non-medical counsellor as a screening tool to predict pregnancies at high risk for poor neonatal outcome, thereby facilitating early referral of these women to tertiary care centres.

Modern medicine has made labor and delivery much safer for both the mother and the baby, but complications still occur.1 Most pregnancy-related medical complications appear to resolve at delivery or shortly thereafter. Common examples are preterm labor, preeclampsia and gestational diabetes. Women who developed such complications are known to be at increased risk of developing similar complications in future pregnancies. Women who delivered prematurely are at increased risk of recurrent preterm labor, those who had preeclampsia in subsequent pregnancies, women who developed gestational diabetes (GDM) are likely to develop it again, as are women who experienced a placental abruption, fetal growth impairment, etc.2 A high risk pregnancy is one in which antenatal women; neonate is at increased risk of morbidity or mortality before or after delivery.3 Risk scoring system provides a formalized method of recognizing, documenting and cumulating antepartum, intrapartum and neonatal risk factors in order to predict the later complications for mother and her fetus. A high-risk pregnancy may be identified by using a scoring system such as the system developed by Dutta and Das for identification of high risk mothers and Hobel for Prenatal and intrapartum high-risk screening.4 The present study was intended to use one such simple, less invasive, cost effective and easily accessible scoring system for detection of high risk pregnancy and to find the correlation between perinatal outcome and various degrees of risk.5

Prospective analytical study carried out for a period of 6 months from September 2019 to march 2020.

The study was conducted in inpatients from department of OBS & GYNC at GSL medical college and hospital, a tertiary care hospital in rajanagaram.

A total of 200 Inpatient of pregnant women with maternal complications were taken with following inclusion and exclusion criteria.

200 antenatal women, more than 28 weeks admitted to obstetrics & gynaecology department from 16-09-2019to 15-03-2020 were recruited.n=120 pregnant women, who had any kind of maternal complications, were taken in the study group. A similar group of n=80 antenatal women with no complications were taken in the control group. To describe mothers and neonates “at risk”, a numerical scoring system based on the combination of the scoring system suggested by Dutta and Das and Hobel was used. A well-designed questionnaire was used to collect data. (Table 1, Table 2). The questionnaire covered variables related to socio demographic factors, family history, medical history, maternal complications. The study group were classified as low risk (1-2), moderate risk (3-5) and high risk (6and above) based on the cumulative total of their respective scores. The antenatal women were followed till delivery and the various complications encountered and treatment given was noted. Similarly, Hobel risk scoring system was done for the neonates, and they were classified as High risk and Low risk. Neonatal parameters like birth weight, Apgar score, Neonatal intensive care unit [NICU] admissions and complications were noted. Chi-square analysis was performed to test for differences in the proportions of categorical variables between the two groups. The level p<0.05 was considered as statically significant.

Dutta and Das Scoring system for the patients were classified into 3 groups:

Comparison of perinatal morbidity between study group and control group

Comparative analysis of neonatal outcomes between study group and control group in NICU.

Relations between various risk groups and the birth weight

Risk assessment of the study group according to the dutta and das scoring system. 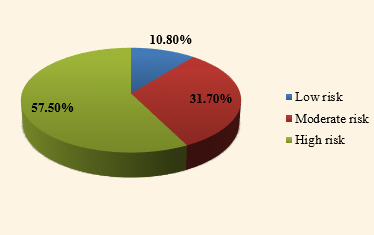 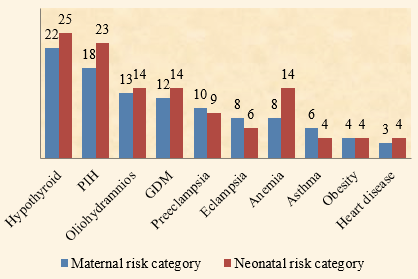 Relation of maternal risk with incidence of preterm. 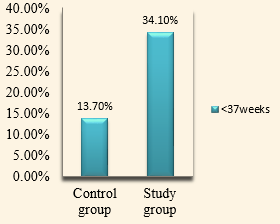 High risk pregnancy is an important contributor for maternal and fetal morbidity and mortality. The purpose of the study was to identify the key risk factor and decrease the complications. Incidence of high risk is more in our study as compared to similar studies conducted by (Samiya et-al. and Vasavi et-al.)5, 6, 7, 8 probably because this study is conducted in a tertiary care center where many cases were referred. (Table 11)

Comparison of incidence of high-risk cases.

The mean duration of delivery was <37 weeks in the study group with significant (p <0.002) Mode of delivery was predominantly by caesarean section in the study group than the control group (p<0.005). The complications in which caesarean section were preferred are repeat caesarean section, hypertension, eclampsia and fetal complications like non-reassuring fetal heart rate. When neonatal complications were compared, Jaundice was significantly more (p<0.05) in study group and fetal distress was exclusively seen in the study group (p<0.005) which again emphasize the effect of maternal complications on the developing fetus and its neonatal outcomes. In terms of neonatal intensive care unit [NICU] admissions, babies in the study group were admitted more frequently for prolonged duration which is statistically significant (p<0.05). The different risk categories from the high risk scoring systems were significantly related to the severity of the disease. For example: — Eclampsia scored a higher risk when compared to the moderate risk like mild anaemia. This concludes that comprehensive risk stratification can be done with a simple risk scoring system namely Dutta and Das which is appropriate for the hospital and feasible to the staff. Furthermore, it can be introduced as a valid tool to categorise and identify all high-risk patients even without the presence of qualified physicians. We have also observed a neonatal high-risk score given by Hobel scoring system, detects all the neonates who need NICU admission and treatment. Babies with birth weight <2.5kg’s were significantly (p<0.0001) at high risk when compared to the low risk and moderate risk. This `finding is in concurrence with previous studies conducted by (Samiya et-al. and Vasavi et-al.)5, 6, 7, 8. Hence these scoring systems are used as a toolto screen all high-risk mothers and neonates and refer them to tertiary centers facilities to manage the neonates with low birth weight are available. As we know neonates with low birth weight is the main contributor for neonatal mortality and infant mortality. (Table 12).

Since we have conducted this study in a tertiary care hospital and all the babies were appropriately managed. There was no neonatal mortality except in one case where there is intrauterine fetal demise due to maternal eclampsia. A varied spectrum of medications, oral and parenteral was administrated as per the protocols of the institutes and it was observed that no patient develops adverse effects to any of the medications which are mentioned in the annexure. The objective of our study was to identify high-risk pregnancy by using Dutta and Das scoring system and to prevent or at least positively modify the suboptimal perinatal outcome. The scoring system was found to have high sensitivity for predicting low birth weight, preterm births and perinatal mortality in high -risk group but low sensitivity in low -risk group. The results obtained were comparable with studies done elsewhere.

This study suggested that there was a significant correlation between high-risk antenatal and poor neonatal outcome. So, scoring systems, such as Dutta and Das scoring system for maternal complications and Hobel Scoring system for neonatal outcomes can be adopted, as these are valid and appropriate, non-invasive, easy and cheap tools which can be utilised even by a non-medical counsellor as a screening tool to predict pregnancies at high risk for poor neonatal outcome thereby facilitating early referral of these women to tertiary care centres. As majority of study group were in their 3rd trimester for reducing high risk pregnancies the most powerful interventions included education of women along with motivation and health care professionals for safe delivery. Early diagnosis and treatment through regular antenatal check-up and referral to the appropriate centre for the better well-being of mother and fetus is necessary because a “Stich in Time Saves Nine”.

This study was undertaken to assess the feasibility and reliability of simple scoring systems for maternal and fetal risk factors and apply them in low-resource settings. 200 women attending a tertiary care centre were screened and assigned to either study group or control group. A maternal high-risk scoring Dutta and Das score and a fetal high risk scoring Hobel score was calculated in both the groups, and they were followed till delivery and neonatal period. We came to a conclusion that these scoring systems were reliable in the prediction of high risk and can be applied in low-resource setting for timely referral.