Suthar and Patel: A prospective longitudinal study of medication errors in private hospital of metropolitan city of Gujarat

Objective: To identify occurrence rate and to suggest management strategies for medication errors in a multi-speciality private hospital of metropolitan city of Gujarat.

Materials and Methods: A prospective, longitudinal study was conducted in surgery and medicine ward of the hospital, during 15th July’2014 to 15th Jan’2015 after approval from human ethics committee. Medication errors (MEs) were categorized as prescription error (PE) and administration error (AE). The case records and treatment charts were reviewed and root causes were identified. The investigator also accompanied the staff nurse during the ward rounds and interviewed patients or care taker to gather information, if necessary.

Conclusion: A high occurrence rate (45.65%) of MEs was observed with no serious outcome. The root causes of errors were identified and training was provided to minimized errors in future.

Any preventable event that may cause or lead to inappropriate medication use or patient harm, while the medication is in the control of the health care professional, patient or consumer- medication errors; defined by The National Coordinating Council for Medication Error (NCCMER).1 Medication errors are a common occurrence and continue to be a problem in the health care industry. It depends on successful interaction among health care professionals functioning at different areas. Errors may occur at any stage of prescribing, documenting, dispensing, preparation, or administration.2, 3 It may also a leave a negative impression on the minds of people about the hospital and may directly impact their lives. Approximately, 28% of adverse drug events (ADEs) are related to medication errors Estimation of drug-related morbidity and mortality is nearly $ 177 billion in the US. There is at least one death per day and 1.3 million people are injured each year due to medication errors4, 5 other factors that can contribute are job-related stress, improper training or education and sound-alike lookalike packaging of medications. This issue has also received considerable attention in the lay press.6 Phillips J. et al. did a retrospective analysis of medication errors between 1993 – 1998 and found that the most common types of errors were from administering improper dose (40.9%); overdose (36.4%), wrong drug (19%) and wrong route of administration (9.5%). The investigators also found that the most common causes of errors were performance and knowledge deficits (44%) and communication errors (15.8%).7 As per USP MEDMARX 2002 report, geriatric patients are involved in more than one-third of medication errors. Reasons for the same were found to be in administration phase of the medication use.

Pharmacists played important role in improving medication safety and have studied to reduce medication errors. Research by pharmacists documented the incidence of drug administration errors in hospitals in the United States as being 10 per cent or higher.4 This provided the evidence and impetus to develop drug distribution systems that were safer, including unit dose drug distribution systems and intravenous admixture programs. These systems were the responsibility for preparing distributing and administering medications by pharmacy personnel. These integrated systems shown reduced medication error rates to less than one percent. Which showed the lowest medication error rate ever documented in a hospital.8, 9

Medication errors are most common occurring in medical set up, harming at least 1.5 million people every year. Therefore, identifying the causes and attempting to prevent medication error are vital in clinical settings10 various such interventions have been devised to reduce medication errors and improve the quality of patient care and also quality of life.11 Considering geriatric population, due to their progressive functional decline in organ systems they tend to develop more chronic conditions and are often prescribed more medications.12 Due to their intricate clinical problems and undergoing multiple treatments they are more likely to get involved in medication errors.13 These may results into adverse drug reactions, increased risk of cognitive impairment, impaired balance and falls, and increased risk of morbidity, hospitalization, and mortality.12 The Beers Criteria for Potentially Inappropriate Medication Use in Older Adults, commonly called the Beers List, is a guideline for healthcare professionals to help improve the safety of prescribing medications for older adults. The criteria are used in geriatrics clinical care to monitor and improve the quality of healthcare. The criteria are also used in clinical care, training, research, and healthcare policy to develop performance measures and document outcomes.14

A comprehensive study was done to determine the types of pharmaceutical errors, their intensity, contributing variables, and the financial impact of medication errors in various healthcare settings around the world. However, there is a scarcity of information on reporting prescription errors in the geriatric population on the Indian continent.15 The primary goal was to investigate prescribing and administration problems among geriatrics. As a result, the current study was designed to determine the rate of medication errors and offer management solutions in a multi-specialty private hospital in Gujarat's metropolitan metropolis.

A Prospective observational longitudinal study was conducted at a multi-speciality hospital, Ahmedabad, India. The study was carried out for the period of 7 months from 15th July’2014 to 15th Jan’2015.

The protocol of the study was approved by Ethics Committee, before the commencement of the study. Written informed consent of all participants were taken before inquired their data collection. Confidentiality of the participants' identity is maintained.

Distribution of patients with medication errors according to the age

Majority of the PEs were reported in each age group of patients as depicted in Figure 2.

Distribution of patients with medication errors according to the age 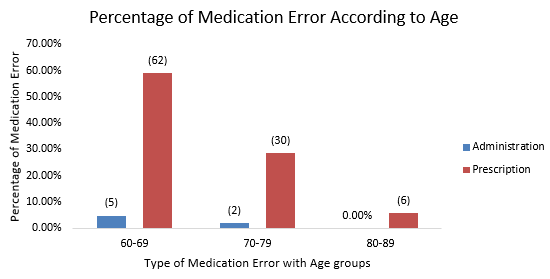 Distribution of patients with medication errors according to the gender

Data of patients were collected from medical and surgical cases of the hospital and percentages of medication errors are showed in Figure 4.

Distribution of patients with medication errors according to the cases 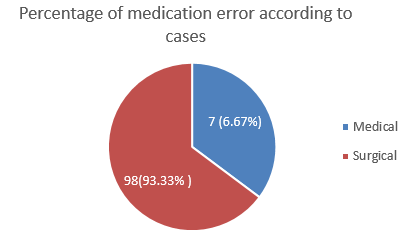 Distribution of patients with medication errors according to the day

Root cause for prescribing and administration errors transpired in hospital

Recommendations given according to the errors

At the end of every month, during study period, data of medication errors occurred in each month were reported to the quality department. On the basis of the medication error report, summary report was prepared and displayed at all nursing station on each floor. Points listed on displayed are as follow:

In this study, total 105 errors were observed from 230 samples and there was no serious medication error found. Prescribing error (93.33%) was most frequently occurred medication error. The overall frequency of medication error was 45.65% reported without causing harm to the patients in the current study. On the contrary, another study found higher reporting of errors with less severity.16 The mean of the patient was found to be 67.55± 3.15 years. Majority of (63.81 %) of errors were found in age group 60 to 69 years. Similarly, Pote et al. study reported that more than 60 years was more affected by medication errors.17 Our study demonstrated that female patients were more affected from medication errors, which is opposite to different studies performed in India, Karnataka, and Saudi Arabia.18, 19, 20

Out of 105 medication errors, 98 (93.33%) prescribing error and 7(6.67%) administration errors were reported. Similar findings were reported by different studies indicating prescription errors as major contributor in errors.17, 18, 19, 20, 21, 22 The consequences of prescribing errors may lead to ineffective treatment outcome or increase in risk of harm among patients due to drug related adverse effects or drug- drug interactions and increase pharmacy cost.

In the study, among the various types of prescribing errors, the error of omission (5.71%) and error of commission (0.95%) was most commonly perceived. Prescribing errors were predominately found in each age group of geriatric patients in our study. Similar study highlighted high incidence of omission error.23 These lead to develop consequences for misinterpretation of pharmacies, including safety threats to patients, reduced efficiency, treatment delays, and increased pharmacy cost. Medication administration errors were identified by systematic method and recorded in documentation form. They were further categorised in the types, frequency and factors responsible for medication administration errors. The data were collected from the case notes, treatment charts, medication administration records and interviewing the inpatients admitted for surgery and general medicine wards.

Patients medication error were review on the basis of days of the hospital stay. It showed that on the 2nd day medication errors (68.45%) were higher as compared to the 1st day (31.72%). On the day of admission, the patient’s conditions will be investigated and finalized the treatment and on the second day the physician change or alter the drug and dose selection based on 1st day’s responses, hence nursing staff might failed to follow the instruction so it may lead to the medication error. Another reason was like, on day one patients received only few numbers of medications i.e. antibiotics on the 1st day of admission to surgical ward. Similarly, another study observed same finding.16 Overall, the prescription errors were higher due to incomplete prescription/ omission errors. The sub type included such as omission of dose (86.67%) and omission of frequency (6.67%). In the case of Administration error, wrong route of administration (0.95%) and wrong time of administration (5.71%) were commonly recorded. Study by Sandip Patel et al. finding was parallel to current study findings.23

We have performed reconciliation procedure to through the identifying root causes of medication errors and subsequently, training program was conducted by internal quality assurance department of the hospital based on our findings. Additionally, summary reports prepared and displayed on the nursing station on each floor and recommendations for prevention of errors were informed to healthcare personnel too.

The occurrence rate of the total medication errors was found to be 45.65%. Medication prescribing errors (93.33%) represent a major problem in the hospital that needs urgent intervention to optimize health outcome. The determinants of the errors were identified and training was provided.

The protocol of the study was approved by Ethics Committee, before the commencement of the study. Written informed consent of all participants were taken before inquired their data collection. Confidentiality of the participants' identity is maintained.

We are very much thankful to Dr. Jasmin Baldha for providing support and guidance in data collection from hospital.

FDA is working with U.S. government partners, including CDC, and international partners to address the pandemic.2021http://www.fda.gov/