Hypertension has arisen as a significant general medical issue around the world. Hypertension is the main danger factor for chronic disease trouble in India. Survey studies from different parts of India have announced a high predominance of hypertension. Former studies have suggested that metropolitan- rural intermingling of hypertension in India is because of the quick urbanization of country populaces with ensuing changes in lifestyles (inactivity, high dietary salt, sugar, and excess fat in diet regimen) and an expansion in overweight and stoutness.

Good quality long-term studies will help to understand hypertension in all aspects; furthermore, it would help in its avoidance, screening, and control. Lastly, we would state that effective prevention and management programs should be broadly executed in India, particularly in developing urban cities.

Hypertension is otherwise called high arterial blood pressure (BP), which is a chronic ailment where the pressure of blood in the systemic aorta is determinedly raised. Arterial hypertension is a significant reason for grimness and mortality due to its relationship with coronary heart disease, renal disease, and cerebrovascular disease. The degree of target organ association (for example heart, mind, and kidneys) decides the physiological consequences. Whenever left uncontrolled, complications from raised blood pressure incorporate cardiovascular breakdown, fringe vascular disease, renal insufficiency, retinal discharge, visual hindrance, stroke, and dementia.1, 2

Classification of hypertension based on standard blood pressure (BP) measurement.

Affirmation of hypertension can be proven by estimating the BP based on standard convention.

The estimation of BP in the office or center is most usually the reason for hypertension diagnosis and follow-up. Office BP ought to be estimated by suggestions displayed in Table 3

Non-communicable infections (NCDs) are by a wide margin the main source of death around the world. In 2016, they were answerable for 71% (41 million) of the 57 million deaths which happened universally. The major NCDs liable for these deaths are cardiovascular diseases (17.9 million deaths, representing 44% of all NCD deaths and 31% of all worldwide deaths). As indicated by the WHO survey report 2018, the level of cardiovascular death rate is 27 % in India.7, 8

Rajeev Gupta et al. examined the hypertension pervasiveness information, acquired from the National Family Health Survey Program 2018. The information shows that there are critical contrasts in the pervasiveness of hypertension in various states of the country. Hypertension prevalence is a lot more prominent in southern, northeastern, and north-western states of the nation and is altogether more noteworthy in men when compared with women.9, 10

It was an observational study. This study aimed to figure out the prevalence of hypertension among peoples in the Raipur district of Chhattisgarh state. Gender and comorbid pathological status were taken as an indicator for the survey. The site of the survey was a mobile medical bus unit and it was conducted in January 2021 for 30 days.

In this study, out of 450 individuals, there were 150 women and 300 men. A patient demographical representation is given in Table 4 along with Figure 1.

Number of males and females with hypertension and co-morbid condition. 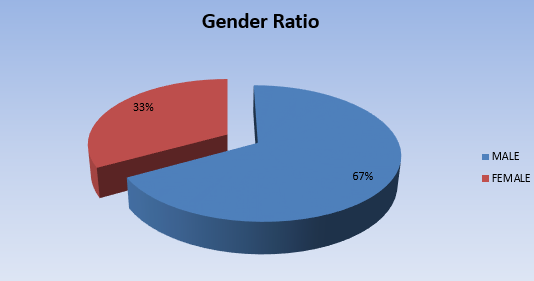 We found that 250 men out of 300 were already suffering from one or more chronic diseases. In addition, 110 women out of 150 were found affected with other bodily ailments as shown in Figure 2.

Gender wise ratio of comorbid and only HTN (hypertension) individuals. 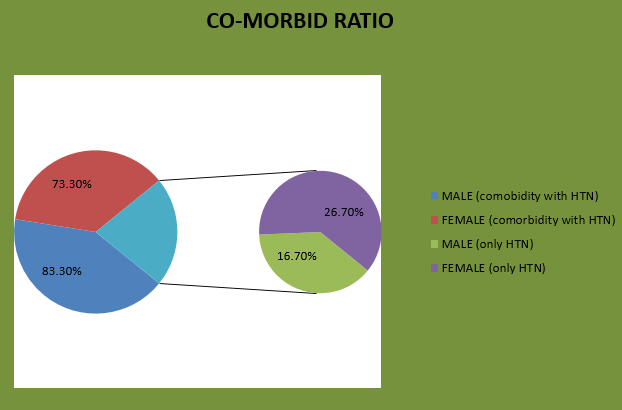 Our second indicator was the comorbid status of individuals. So, we have also figure out the gender-wise number of patients based on existing complications (Table 5 & Figure 2).

List of male and female with existing pathological problem.

Graphical presentation of hypertensive male and female suffering from other disease. 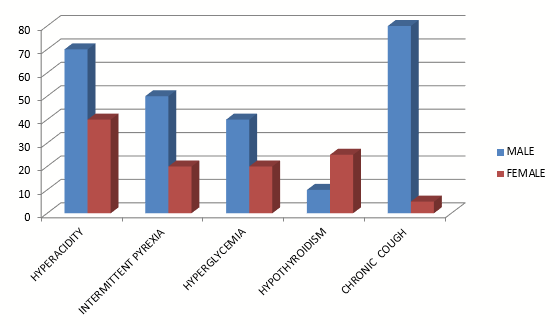 Patients were advised to take amlodipine, atenolol, and telmisartan for the management of hypertension. Combinations of these drugs were prescribed on the basis patient’s pathological condition and severity of hypertension disorder.

Advice given to the patient

Regular exercise, a healthy diet regimen, which should include potassium-rich vegetables and least consumption of sodium, quit smoking and hard drinks, and blood pressure monitoring at home had been advised by the doctor.

Blood pressure was measured by following the standard protocol of “official blood pressure measurement” (OBPM). According to the protocol, the indication number for hypertension is considered as ≥140 and/or ≥90 systolic and diastolic respectively.

It was found that 83% of male individuals were already suffering from a chronic ailment as shown in table 5. It indicates that hypertension may be a secondary disorder due to the existing problem. Furthermore, chronic coughing and hyperacidity were observed as a common existing problem in males; which also indicates chain-smoking habit and irregularity in routine respectively.

On the other hand, 73% of female population was diagnosed to have other diseases (Table 5). We observed that most of the females were suffering from hyperacidity and hypothyroidism before hypertension disorder, which again indicates that daily routine is not systematic along with malnutrition.

Limitations of the present study

The diagnosis is solely made on patient history and clinical findings. The assessment was not done as the patient was feeling reluctant and no objective parameters were used in the present study.

We had observed some other chronic ailments in hypertensive patients, but we only took five common diseases/disorders for the survey data. As we all know the current pandemic situation. It is due to this reason the survey was done by following the COVID guidelines.

Thus, present study findings cannot be generalized and further experimental and/or clinical studies with a large sample are required to substantiate the present study observations.

Hypertension is mainly considered as a daily routine disorder; it means that only drug is not enough to combat this problem but doctor’s advice regarding diet regimen, regular exercise, home blood pressure monitoring, and stress management would also play a significant role in the management of hypertension.